A year or so ago, Bytronic decided to help to set up a charity for orphans and villagers in Morocco.

The Amali Association was formed, and has saved many lives already, and improved many others. Amali, which means ‘my hope’ in Arabic, was started after a courageous man walked many miles with an injured boy in his arms. Nobody stopped to help. Not because they didn’t care, but because they were afraid to do so.

In Morocco, the law states that if a person dies in your vehicle, you are responsible for their death, and will be investigated. Consequently, many people die because an ambulance is not available and nobody will risk driving the patient to the hospital.

Amali’s approach to helping orphans is to work to solve the root cause: fewer children will be orphaned if their parents have access to ambulances and the medical help they need. Road accidents are a major cause of death and serious injury in Morocco, and swift treatment is crucial. The provision of an ambulance would go a long way to preventing many deaths, therefore preventing many children becoming orphans.

An ambulance for Zellidja Boubker

Perhaps the most exciting project, and the most important for the people of Zellidja Boubker, was the provision of the charity’s ambulance. In February 2012, the village’s ambulance finally arrived from France! 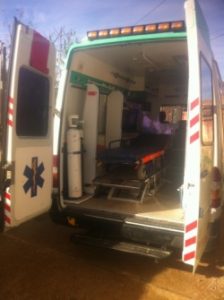 Comprising a driver’s cab and a separate sanitary cell, roomy enough to hold a large stretcher and another adult, the ambulance is equipped with a worktop, storage space, a washbasin and a water supply tank. It now has an oxygen cylinder as well, after a woman tragically lost her new-born baby.

In the 10 months that it has been in use, the ambulance has saved a lot of lives, including two men injured in the mine, road accident victims, a young girl with respiratory failure, an old lady suffering from a heart attack, and several pregnant women.

On its very first day, the ambulance helped to bring a new life into the world when it took a pregnant woman to the hospital at 3am.

Hope for the villagers

Our ambulance stands ready to help the residents of Zellidja Boubker 24 hours a day, seven days a week. However, support is an ongoing concern: insurance is required every three months, and the ambulance needs regular refuelling. The charity relies heavily upon donations, and we would be grateful for any help you could give us.

This year, in place of Christmas cards, Bytronic decided to make a donation to the charity. We’ve managed to pay for insurance, fuel and winter clothes for the orphans.

If you’d like to get involved, please get in touch with us for more details. Keep an eye on our blog, too, for regular updates from the charity.