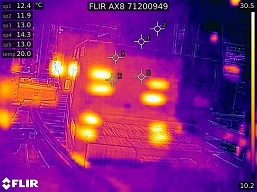 Bytronic Automation has recently undertaken a turnkey vision system on behalf of a household name beer brand for the inspection of the integrity of boxes used to package the beer bottles. The project involves the use of LWIR imaging and traditional colour imaging and is fully integrated into the system as the boxes emerge from the cartoning machine.

The boxes are formed in the cartooning machines and hot melt glue applied to the flaps of the boxes. These are then folded to stick to the sides of the box to complete the assembly. By ensuring that the glue is the right temperature, and has been applied to the correct areas in the desired quantity; the manufacturer can be certain that the boxes are stuck together thoroughly, and are safe to be moved ready for transport. If the flaps are not properly stuck, then the boxes can collapse on the pallets causing breakages. A secondary problem is that sometimes the glue is applied in the right place, but the flaps aren’t formed or folded properly resulting in an irregularly shaped box.

The vision system consists of a colour camera and FLIR LWIR camera, looking at the edges of the box where the flaps fold over. The FLIR thermal imaging camera is providing a focused readout of the temperature of the glue and that it is in the right place, imaging through the cardboard material of the box. The colour camera checks that the flaps have been properly formed and that the box is the correct shape. The vision application software for this project was developed using Vision Pro software from Cognex. In the event of a failure, the line is automatically stopped and additional glue can be applied manually.