If you’re a child of the 80s, you’ll surely remember Pez Candy. 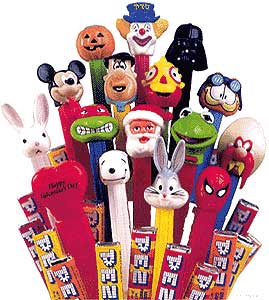 A toy and a sweet all in one; what more could a child wish for?

But what has Pez candy got to do with machine vision, you may ask? Well, the full story is on the Vision Systems blog, but here’s a précis.

You may remember that there were hundreds – possibly thousands – of variations on the Pez dispenser. There were different animal heads, comic book characters, Disney characters… you name it, there’s probably a Pez head out there to match it.

The Hot Pop Factory (which, incidentally, makes fabulous and interesting modern jewellery) has custom-built a Pez dispenser as a gift for each employee of one of their clients.

To do this, the Hot Poppers scanned the heads of all 32 of the client’s employees, creating a digital 3D image. How they managed to persuade the employees to do this for ‘a mysterious research project’ is anyone’s guess – a combination of hypnotism and tall tales, possibly – but at any rate, the heads were scanned.

What’s interesting is the hardware and software they used: the Kinect camera, used with Microsoft’s xBox. Here’s the Kinect in action:

After modelling, the Hot Poppers used MeshMixer (a free software tool that looks like loads of fun) to create the full 3D models. And voila! The heads were ready to print. A novel use for 3D imaging…

…and a great example of how new technology makes its way from the research lab to serious use in the military (or other industries) to the gaming world, and out the other side into ‘mainstream’ business.

The Kinect is a motion-sensing input device created by Microsoft for the Xbox 360 games console and for Windows PCs. Users control and interact with the Xbox without needing to use a standard controller. The user interface is pretty natural: you just use gestures and spoken commands. It’s the stuff of sci-fi, or it used to be; now it’s in our front rooms, Jetsons-style.

Like many other techie gadgets, though, it’s ripe for modding and hacking – and modded and hacked it has been. The Kinect is finding uses all over the place, not just creating customised Pez heads.

In fact, there’s a website devoted to Kinect hacks. It’s somewhat nerdy, but very interesting and a great resource for those who want to find out more about what can be done with the device.

Kinect for industry and beyond